Territorial scale – How to inhabit the anthropocene?

Humanity has moved into a new age: The Anthropocene.

«It is a scientific concept that postulates that the earth has entered a new geological era, when human activity has become the dominant geophysical force. Beyond the scientific debate, the Anthropocene is a societal subject, the name of an environmental awareness, which confers a huge responsibility to humankind: finding the tools to take up the challenges linked to the current lifestyle. »

To repond to this question, the first opus of our long-term study will consist of proposing a new territorial balance, based on “Distributed Urbanism” concept.

The project is located on the plot of land of the former hotel «Les Deux Soeurs» and aims to be a dynamic place on the Arzelier pass. The project hosts a mixed program with housing as well as spaces open to the public, and wishes to foster a spirit of «making a village». There is a teleworking space, an associative café, spaces to accommodate local associations, an associative nursery and a workshop in the basement. These spaces for meeting and sharing offer the possibility for the different actors of the territory to work together. 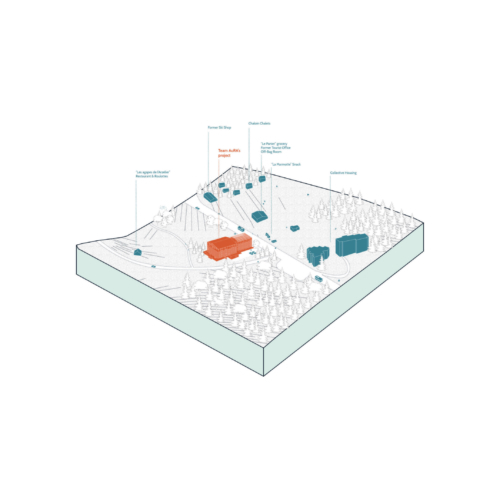 Isometry of the site concept short