Rank in the Competition

Discover our project in video !

How to live in the Anthropocene ?

Outline a fertile territory and a sustainable society, which would also allow the development of all forms of life, is by far the biggest challenge of the 21st centu­ry that humanity must take up. Indeed, objective indicators show, one after the other, an advanced and growing state of degradation of the planet, and irrever­sible changes are already underway. It is no longer a matter of avoiding them, but of limiting their impact. Humanity move into a new age: The Anthropocene.

By posing and accepting this observation, we can individually take on a share of the world’s torment and, as a result, believe in our collective capacity to change the course of things. To this end, we have the ambition to bring out,  several projects and stories that will allow us to consider different ways of living in the Anthropocene.

«It is a scientific concept that postulates that the earth has entered a new geological era, when human activity has become the dominant geophysical force. Beyond the scientific debate, the Anthropocene is a societal subject, the name of an environmental awareness, which confers a huge responsibility to humankind: finding the tools to take up the challenges linked to the current lifestyle. »

The first opus of this long-term study will consist of proposing a new territorial balance, based on “Distributed Urbanism” concept.

The revitalisation of rural communities as a vector of territorial balance

Our team is convinced that the revitalisation of rural areas can be a powerful vector of territorial balance, a balance that is essential to increase the resilience of our regions in the face of environmental, climatic and health constraints. In concrete terms, as Antoine Brès suggests, it is a question of reflecting “on a given territory, what is the most efficient, attractive and ecologically sustainable distribution of its population, as well as of the activities and services it needs?”.

A territorial Project for the SDE21/22 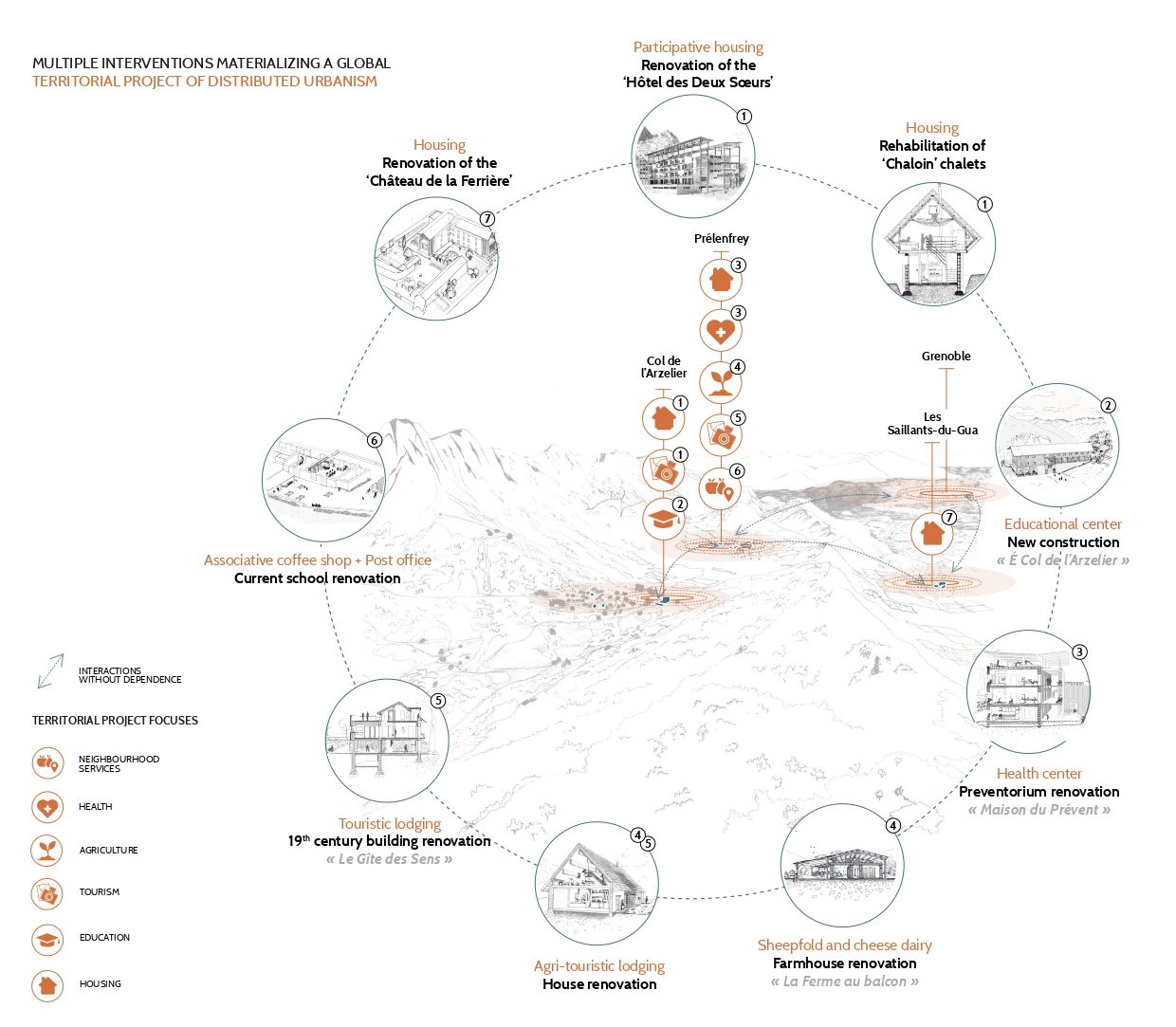 Our approach develops a logic of global design through various project actions developed on the territory. During workshops in 2021, 10 students from the School of Architecture of Grenoble, have approached five themes via hypotheses of projects located in the territory around the Arzelier Pass :

Care and health as a lever for social and economic development;

The new tourism of mid-mountain, and the seasonal habitat;

The offer of facilities related to education and leisure;

The transformation of existing buildings, into permanent housing.

Thus, the projects take place in different villages around the Col de l’Arzelier and are enriched by each other, with the objective of accompanying the transformation of the tourism model of the former resort, closed in 2018.

All of these projects come together on transversal themes such as mobility, mutual aid linked to the local associative fabric, or the desire to enhance the current built heritage.

The rehabilitation of the « two sisters » hotel

The hotel of the “two sisters” 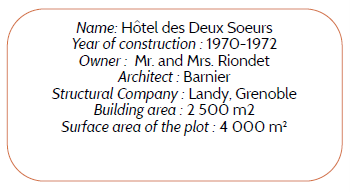 The hotel is located on a high point of the commune of Château-Bernard, in the heart of the clearing of the Arzelier pass, and offers very beautiful views of the landscape from all its facades. Its name, «Les Deux Soeurs» is in direct link with the geographical element overhanging it: the summit of the «Deux Soeurs».

a project rooted in the territory

The imagined program of the «Agathe et Sophie» project answers the current needs of the territory. It was established from our field surveys and research. The program is mixed, divided between public and private. The programmatic distribution was guided by our desire to preserve the structure and spatial qualities of the building. The different spaces acces­sible to the public are distributed on the first floor and in the basement, while the private housing is allocated to the floors.

– The third place in the ground floor –

We can imagine finding a coworking space, a DIY workshop, a community café, a micro-care cen­ter, a computer space, or even spaces to host local associations. The programming of these spaces is co-constructed with the inhabitants and the elec­ted officials to allow collective initiatives, exchanges and cooperation.

– Participatory housing on the upper floors-

The floors, private, accommodate participatory housing. A wooden structure, the Shell, allows the interior spaces to be extended to the outside and towards the landscape. This structure gives the building another identity and «restores its image», today considered by the locals as «a concrete car­cass». On the roof, this structure was designed to dialogue with the environment, creating openings on the panoramas.

In the course of its life, a building is bound to change programs and uses; to have several lives. In order to facilitate this evolution, the entire renovation of the building is inspired by the notion of capable space and evolutivity. We develop architectural systems that allow both the reclamation of a modern structure and the appropriation by the inhabitants: Through games of assembly and frames, the constructive principles of renovation, extension and development are designed to be modified and/or recycled simply. Our approach wishes to anticipate the evolution of the building from its conception. In this sparsely populated area with many vacant buildings, we treat the question of extension as an element that improves the quality of habitat and not as the creation of new living spaces.

We decided to reappropriate the Core, Skin, Shell concept, worked by the AURA team during the previous editions. This tool ,adapted to the new construction, has evolve to adapt to the question of the renovation of the building by introducing the concept of Grid.

The Grid, the technical network, follows the constructive logic of the existing building by inserting itself into its grid structure and allows to anticipate the evolutions of the housing and to facilitate the maintenance of the technical elements

The Skin, the thermal envelope added to the building, uses low-tech and local materials manufactured according to local construction cultures.

The Shell, is an extension to the building in exo-wood structure that offers many possibilities. The Shell can be used as an extension of the interior space to the exterior as a winter garden or terrace. 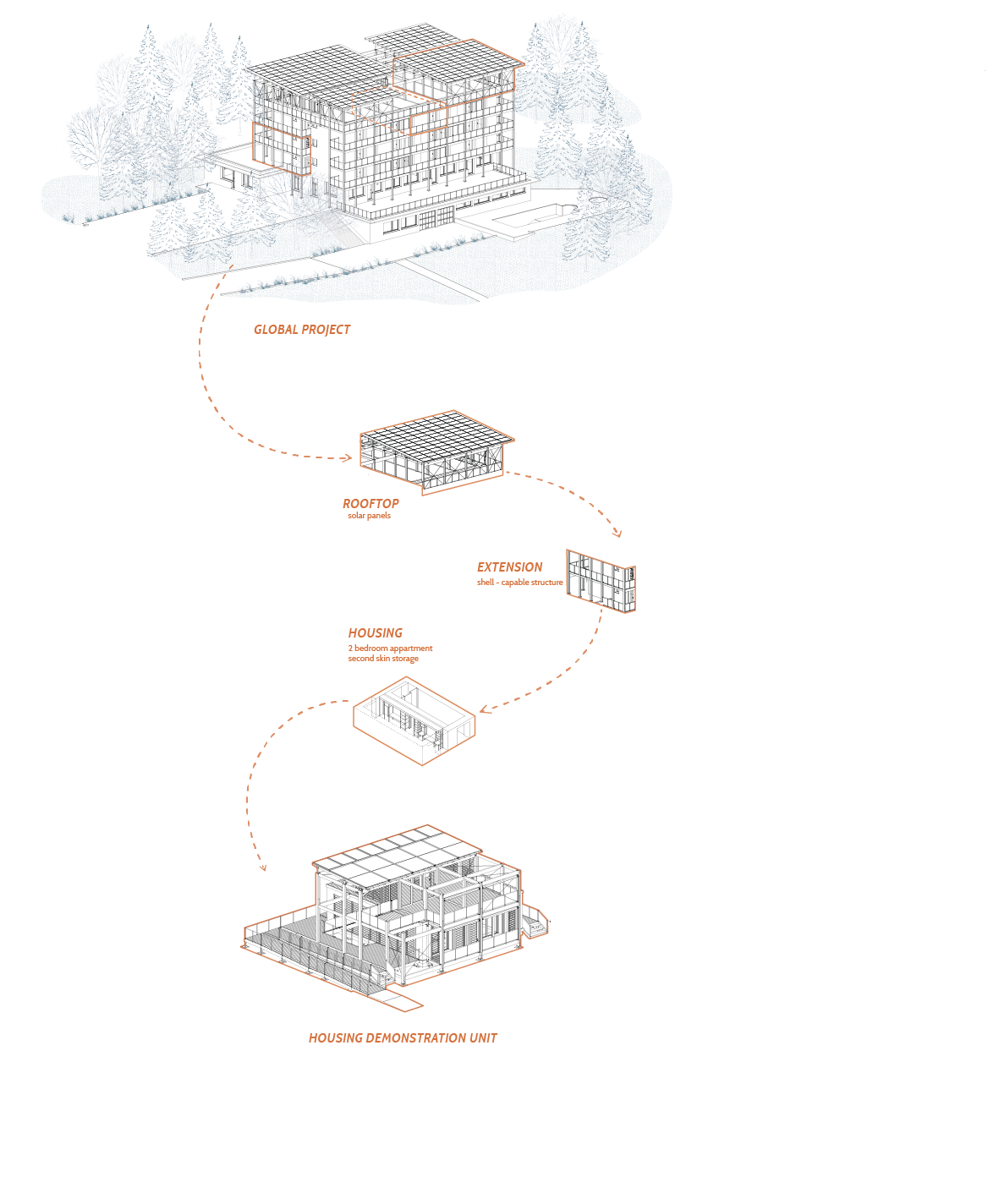 A building with a very low environmental impact

As the work done at the whole building scale, the demonstrator will be designed as an exemplary project in the choice and implementation of materials. We have focused on the health and sense of comfort of future residents in the interior design of the housing.

The reuse is a strong issue for the team, using it both as a resource but also by designing elements that are easily modular and dissociable, allowing replacement or an easier revaluation. The HDU will thus be composed of materials of reuse resulting from the regional «urban mine», but it will also benefit from the «urban micro-mine» constituted by the dismantling to come of the old prototypes Armadillo Box and Canopea, presented respectively to the SDE10 and SDE12.

The wood comes from sawmills in the region, found by relying on the Fibois network (an association that brings together all professionals in the wood industry). The fibers come from the agricultural waste that makes up our straw insulation and the raw earth is collected locally. For that, we worked in collaboration with the DSA Terre of the ENSAG, with them, we thought about the composition of the walls. (see ENCART Grain d’Isère). The use of earth, particularly in interior cladding, contributes to the feeling of comfort. This choice of materials allows us to favor hygrometric regulation and to bring a thermal comfort inside.

Since 2001, our universities have been developing a “learning by doing” pedagogy. The founding idea lies in the conviction that learning in contact with the real world would enable students to take up the challenge of the ecological transition.

Participation in the Solar Decathlon Europe was an essential step in introducing the issue of collaborative work into the experimental projects developed by the team. It was a question of trusting a collective capacity to generate new knowledge based on a process of decompartmentalisation.

Thus, for the fourth time, students, teachers, researchers and professionals making up the AuRA team have taken up the challenge of experimentation to reinvent new practices and support professional changes.

The prefabrication of the demonstrator is entirely carried out by our team. More than 90 apprentice compagnon, student architects and engineers work tirelessly at the Grands Ateliers.

Meet us in june in Wuppertal !